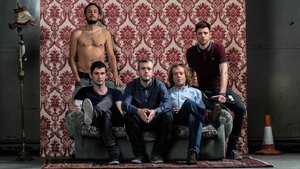 Full disclosure before we kick off – as you can see below, I’m a huge Second Captains fan. I’ve got the mugs and yearbooks. I know all the quotes, I’ve seen the TV show and I’ve followed the lads since they were fledglings on Newstalk.

And I’m also an avid media watcher, meaning this week’s announcement that Second Captains is moving from its cushy nest in Irish Times towers towards the wilds of a paywalled, community funded model from next Monday made me irrationally excited.

Maracana with the lads

The Captains have decide to offer fans a ‘metered paywall’ model, in the guise of a New York Times or Irish Times, and will begin charging users €5 a month for a new ‘World Service’ edition.

The show will be kept ad free, and two free shows on Monday will remain, but in place of Thursday’s double bill, they will instead put out one daily podcast between Tuesday and Friday.

Mark, Ciaran, Ken, Simon and Eoin have shown plenty of balls in their media career. They’ve backed themselves to move from Newstalk, set up their own podcast against the backdrop of some scepticism, pitched and their own TV show, and won a new audience through their summer stand-in slot on RTE Radio 1.

In all of this, their fans have followed them.

But this is a different kettle of fish. Asking people to pay 5 quid a month is where the rubber hits the road.

Niche or enormous, there’s no middle

I’ve spoken before on this blog about how media is fragmenting and new models are emerging. Essentially, to succeed in modern media, there are two choices.

On the one hand, you can strive for enormous scale and hope that pays off. Try to make money by monetising your readers through display, print or paywall subscriptions, try to speak to everyone and cast the net as wide as possible. This requires experimentation and a reliance on distribution platforms, since most of us consume our media through social feeds now (and also leads to clickbait). Buzzfeed is probably the best example, but most daily papers play this game too.

On the other hand, you can be really, really valuable to a small cohort of people and hope that they love your work enough to provide enough income. Often, this requires a heavier paywall and ancillary revenue streams like events, merchandise etc. You can see this in effect across media, in places like The Economist, The Farmers Journal, The Information, Skift and in podcasts like ‘The Anfield Wrap’ and Marc Maron. In a similar vein, individuals like Tim Ferriss have created their own mini media empires too. It requires that you understand your fans, are very close to them and relies on you continually creating lots of value for them.

There’s very little middle ground between these two options, and media companies without serious scale or serious relevance are getting squeezed badly.

With the Second Captains paywall, the lads have chosen the latter route.

They might not have heard of it,  but the way Second Captains as a brand has grown takes a lot from the ‘1000 True Fans’ approach, first coined by Kevin Kelly. According to Kelly, because of the lowering distribution costs on the internet, it’s now much easier to reach the people who really love what you do. The 1000 figure is just an arbitrary number, but the essence to his point is that if you can find a certain number of people who will buy anything that you put out, who really get huge amounts of value from what you do, and then service them directly without intermediaries,  you’re in business. It’s a theory that’s still very relevant in 2017, as the lads will attempt to prove.

If you lived in any of the 2 million small towns on Earth you might be the only one in your town to crave death metal music, or get turned on by whispering, or want a left-handed fishing reel. Before the web you’d never be able to satisfy that desire. You’d be alone in your fascination. But now satisfaction is only one click away. Whatever your interests as a creator are, your 1,000 true fans are one click from you.

The way Second Captains has grown its following has been both methodical and masterful. This move to paywall hasn’t come all of a sudden. They haven’t just started asking people for money, their growth has been staged, they’ve built slowly and smartly creating products and events, branching out into other media and even building their own brands through journalism. With the new model, they’ll likely be ramping up these extra revenue streams, but critically fans are already used to paying. According to producer Mark Horgan, speaking in the Indo this week, “The way our audience has developed is interesting. Many are the same people who listen every week and they want more. They’ve been dedicated since the beginning. It’s also rolling the dice in some ways, but it’s perfect for this type of journalism. At our last event, in December, we sold out in hours. Part of the deal with the new membership subscription is that members will get first call on tickets.”

The benefit of radio and podcasting is that it also really lends itself to creating strong relationships with fans, since your in their ear for 4-5 hours every week. It seems the lads are now ready to monetise all the work they’ve put in to these relationships.

So what are the economics like? From the outside, this seems like a gamble. Why move from under the brand of a large media group (The Irish Times) that can offer you distribution and fame?

But Killian Woods put out this interesting set of tweets during the week, and, even with back of fag packet sums, the money part seems to make sense.

When you really analyse it, the risk here is small and calculated. The lads have a hugely valuable brand. That won’t be going away. They own their own channels too, which is crucial.

And even if this goes wrong, the worst case scenario is they go back to usual podcasts and sell advertising. I’m also pretty sure that another media company would come calling very quickly. But it won’t go wrong. They’ve done the sums, they know how much their fans love them and they’ve seen other models in media make money this way. This is never going to be an explosive growth business, but I’d be pretty bullish that it’s a smart decision.

Irish people are willing to pay small recurring amounts in subscriptions for a high value service, particularly in sport, and particularly if it’s a company with a strong value offering that you can’t get anywhere else.

Best of luck Second Captains, and congrats on a ballsy call that should show the way for the rest of Irish media.

They never go home those boys.