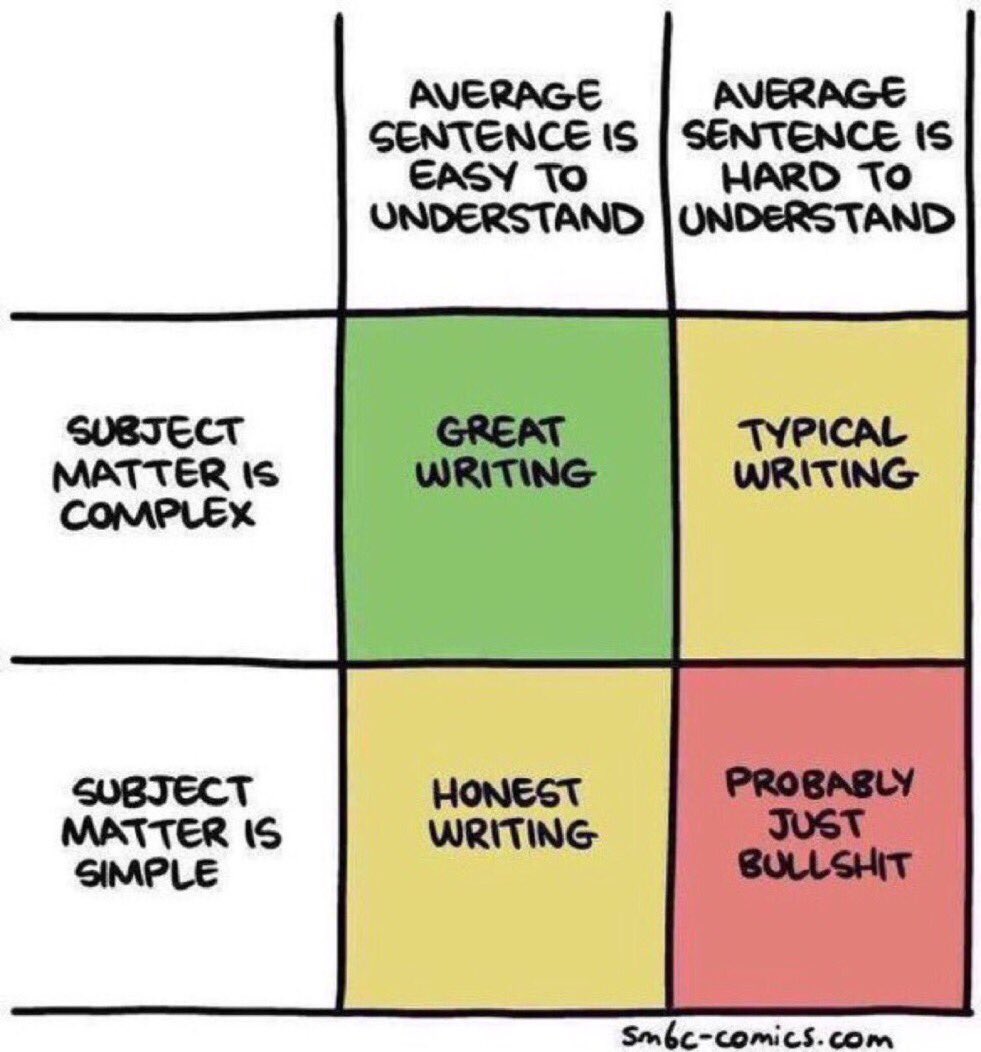 I got stuck in a stuffy client/agency meeting recently. It was a Friday evening, and after a very long, detailed presentation, the whole room was flagging. The energy, free pastries and coffee that we enjoyed two hours ago a distant memory.

Then, just as we ended, one of the agencies did something that I’ve rarely seen before. The planner flicked to the last slide, titled “Enough of your bullshit, just get to the point” and finished the presentation with a three line rundown of their approach.

It cut the air of stuffiness and gave the meeting a renewed vigour. More importantly, we all remembered it 24 hours later.

Having a quiet word with the presenter afterwards, she told me a quick story. Seemingly, after another equally long meeting for a pitch, a client had fallen asleep while she was presenting. Upon waking at the end, he asked her to give a 10 second snapshot of her strategy.

She froze, unable to condense her big meaningful words into a short, sharp takeaway. Annoyed by her lack of clarity, the client snapped. They lost the business.

Since then the agency has made sure that every presentation ends with one of these pithy takeaway slides.

I made a mental note to steal the idea.

One of his favourite pastimes is taking the piss out of bullshit brand terminology. Accenture is a particularly easy target.

You mean “militating against”, you semi-literate guff machines. pic.twitter.com/ddPW4AMhKk

I also like following Ryan because he consistently reminds me to be on my guard about falling into the jargon trap.

Every planner does it.

You’re giving a presentation and throw in a big word that you’d never normally say to ‘impress’ the audience (while cringing on the inside).

You over complicate a theme to make it sound deep and meaningful, when actually it’s just simple and probably useless.

Sometimes, you do it unknowingly. It’s the curse of knowledge – you understand what you’re talking about intimately, but others in the room don’t, so you use terminology that goes way above their heads.

But most of the time it’s done on purpose. We fully believe that using big words makes us sound more intelligent.

It’s part of the puffery of modern life.

Why use one simple word when three complex ones would do?

As my ex boss James Dunne wrote recently, the problem with planning is planners, and our turbocharged egos are drawn to over complication and downright wankery.

Yet tests have shown that there’s a negative relationship between complexity and judged intelligence. It turns out that using unnecessarily complex language is a red flag to people.

Making seemingly simple things seem complex is a way for insecure professional ‘experts’ to insulate themselves. After all, if everyone understood complex topics like politics, the economy, digital marketing etc, then there’d be no need for them. Only when something is made difficult to understand is there a need for experts, who can charge high fees on the auspices of having figured it out.

But as Occam’s Razor states, the simplest explanation is often the correct one.

For example, you’d think that a guy like Warren Buffett would be a master of complexity, a wizard of financial instruments that the normal person could never grasp. But in fact, one of the richest men on the planet abhors unnecessary complexity.

“there seems to be some perverse human characteristic that likes to make easy things seem difficult”.

He purposely avoids speaking on topics that he doesn’t understand.

Maybe we could all learn from that.

Avoidance of jargon is particularly important to good writing. As Stephen King once wrote, the best authors ‘kill their darlings’ by ruthlessly editing. They do the hard work on behalf of their readers, chopping out any complexity and fat until their writing is razor sharp.

Strategists could learn from this.

It’s our job to use an Occam’s Razor approach to strategy, to separate the wheat from the chaff. We’re supposed to do the hard work upfront that chisels away at a problem and reveals its sharp edges. But unfortunately, our profession has become a byword for jargon and faux expertise.

We mistake lots of slides with big graphs and words for solid thinking. We blunt our thinking by hiding it in this tangled mess.

But it takes balls to lay yourself bare, to be confident that you’ve done the background work and just give the shortened version of a strategy instead of the full brain dump.

In such a climate of bullshit, to be able give a cogent, clear, simple story of where we’re at and where we’re going is an incredibly important skill.

As Michael Gove famously said, “people have had enough of experts”. So let’s stop coming across as egotistical “experts” and have a bit more intellectual empathy and humility.

After all simplicity is the ultimate sophistication.

“Enough of your bullshit, just get to the point”.