The future of advertising agencies as encapsulated by Maurice Levy

Having been on both sides of the fence (I’ve previously worked in a startup and in a large media organisation), you get a good feel for the good and bad parts of a marketing role.

And you know what?

I love working in agency land.

The opportunity to work across many different brands, solving a variety of interesting problems is energising. Though it’s stressful at times, there’s constant change and excitement, which is something that we all value in work.

But another reason why it’s such an interesting time to work in an ad agency is the disruption element. Thd industry is shifting before our very eyes with the rise of programatic buying, mobile ubiquity, content and social media marketing and lots of other huge changes. While the change isn’t at the level sustained in media or music yet, a serious shift is on the horizon.

So what does the future of the agency look like? I’ve written before about the topic and there’s certainly no right answer, but for me, it’s firstly about adding value higher up the business strategy chain. Agencies that become product creators and help shape an org’s future, rather than just merely being a node for advertising creation, will have a much larger chance of success.

But it’s also about changing the way we set ourselves up and think about organisational design. Bud Caddell’s ‘Undercurrent‘ are a must follow company in this space, and have done a lot of thinking on the broader topic of how company hierarchy should look in this new age.

This thinking can also be narrowed to the ad agency space.

Take the diagram above for example, which outlines a ‘manual for the 21st Century organisation‘. Caddell and his team give 7 rules for combating uncertainty and insulating from disruption. ‘The most impactful organisations on the planet are playing by these rules’ it seems, and there’s certainly a lot to take for agencies looking to the future.

The days of the 12 month media plan set in advance is over. With the sheer pace of culture being driven by digital technology, agencies can’t afford to be that specific about the future. Snapchat, WhatsApp and Instagram were barely around 18-24 months ago, yet they could help to shape the future of advertising, while our smartphones will become the key channel for marketers in the very near future. Taking educated risks in recruitment, campaigns and pitches should be a pre-requisite.

There’s a good case to be made that those at the top of a company are in fact the last people who should be shaping the future of the agency, considering how far removed they may be from the realities of the day to day, and the sheer scale of change that’s happening on a daily basis. Empowering younger people within your agency and nurturing them into leaders is both a prudent way to improve your talent base, but also a necessity for future success it seems.

The timesheet will never die, and all great agencies need smart processes, but these also need to be flexible. Creativity, which should always be the focus of an agency, gets stifled if process is too strenuous. Allow employees to ‘hothouse’ ideas, share learnings and to drag in other opinions to a campaign planning stage if necessary. Often, a small agency has an advantage here, as mobility is almost a given, considering smaller resource, but internal flexibility must be maintained even as an agency grows.

The default within agency land seems to be secrecy unless it’s a positive and manicured message, but this too needs to change. Perhaps the best example of an agency sharing information freely and gaining from it is Simply Zesty, but the likes of Social @ Ogilvy also have a strong content marketing strategy for their own brand too. Transparency must be valued, and that goes for internally too – often, information sharing between departments can be non-existent, meaning a lack of wider learning or insight into what other people in the company actually do, or worse, good insights and ideas falling through the cracks due to bureaucracy getting in the way.

The best agencies are more than just agencies. They’re artists, product creators, cultural influencers. As Caddell rightly says, ‘rarely is there just one solution to a given problem and rarely do you know the return on each solution before they are tried’. Influences from other business and media spaces should be sought, and often divergent thinkers are the key to unlocking the answer to a problem. Staleness in thinking can be an easy trap to fall into, and needs to be combatted.

This concept is based around ensuring objectivity in ideas, and allowing teams to mesh their ideas when relevant. ‘For organisations in transition, the single most important thing that can be done is to remove politics from deciding wins, ensuring that objectivity reigns in decision making and ensuring teams are rewarded for tangible results’. This counts doubly for agency land.

Again, relevant to the idea that secrecy has always been king in the marketing world, building softer networks of people you can call on (freelancers, designers, technologists or even artists) is both cost effective, but better for the brands you work for too. Without the constant salary costs, you get insights into other, related areas to advertising and the cultural benefit of working with great people – the network effect of labour so to speak. 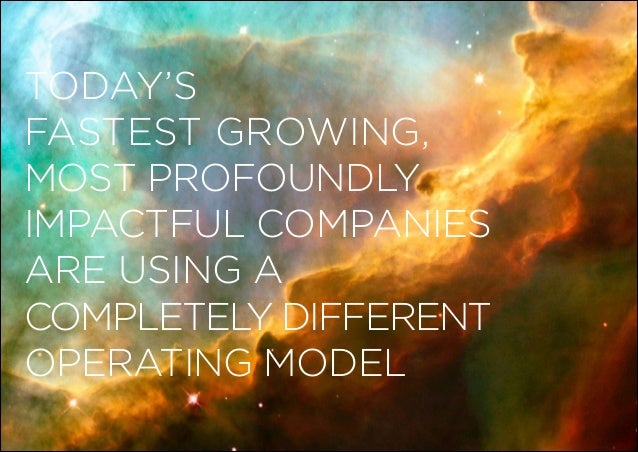 Advertising agencies, in some form or another, will likely always be around. But they aren’t insulated from being completely disrupted. Sleepwalking into an era of non innovation or an attempt at avoidance of this, just like newspapers or physical music, would be a huge oversight.

The 21st century advertising agency will have many subtle differences. While the above isn’t a roadmap for success, change is a comin’, and it will impact your agency, so there should be a lot to think about.

For more on Undercurrent, see here.

2 thoughts on “The 21st century advertising agency – a model?”